Who’s never heard the mantra Big Bait: Big Fish! And who wants to catch the biggest pike of his life? We all do! So let’s find out how to achieve that. We will talk tackle, tips, and techniques. But it’s important to remember the mental aspect. Big pike anglers are not after lots of bites, if you do commit to catching a real giant it means culling out the little fish. It will often mean one bite per day or less. But when it happens and the line tightens, it will make it all worth it. Catching big fish is quite addictive however and soon enough you will not want to to fish anything other than big bait for pike. So let’s dive in!

Which big bait for pike

Lure size in the twenty centimeters range will weigh between ninety grams to 200 grams and sometimes more. So, you need a rod built for this kind of power rating. I would recommend baitcasting reel and rod in the eight feet length range. If you intend to fish more jerk baits than swimbaits you should get a shorter rod, say about seven feet long.

For jerk baits I would select 50 to 80 lbs. braided line and 40lbs (45/100th mm) quality nylon or copolymer line for swimbaits. Why not braid for swimbaits? Swimbaits don’t cast as well as jerk baits and tend to be heavier. If something goes wrong while casting a 180 grams lure with braid, a tangle in the reel maybe then something has to give, meaning break. Whereas monofilament will stretch and dampen the shock.

First of all, there is no wrong lure to use to big pike as long as they are big! Really this is all about size, it’s what will draw the fish and decide them to bite. Unlike other game fish like zanders or bass, pike doesn’t seem too picky on lure colors. Pink, purple, chartreuse, bright orange have been known for generations of anglers to attract pike just as good as natural colors.

I tend however to lean toward fish-looking big baits for pike but honestly, it’s more of a matter of self-confidence than anything else. The reason behind it is how can a realistic finish ever be wrong? So maybe stick with natural hue in super clear water and switch to more gaudy colors in murky water.

Because visibility is never really an issue with a twenty centimeters lure, you can get away with just about any color. That being said, and it’s hard to explain, some colors are just wrong in a certain environment. So before making a cast, just dip your lure in front of you and look.

For example, chartreuse lures look weird in tea-colored/tannic water, but red or copper look particularly good. Does it matter? Probably to some extent, after all, if a 120 centimeters pike follow your bait without striking because of a wrong color, how would you feel? 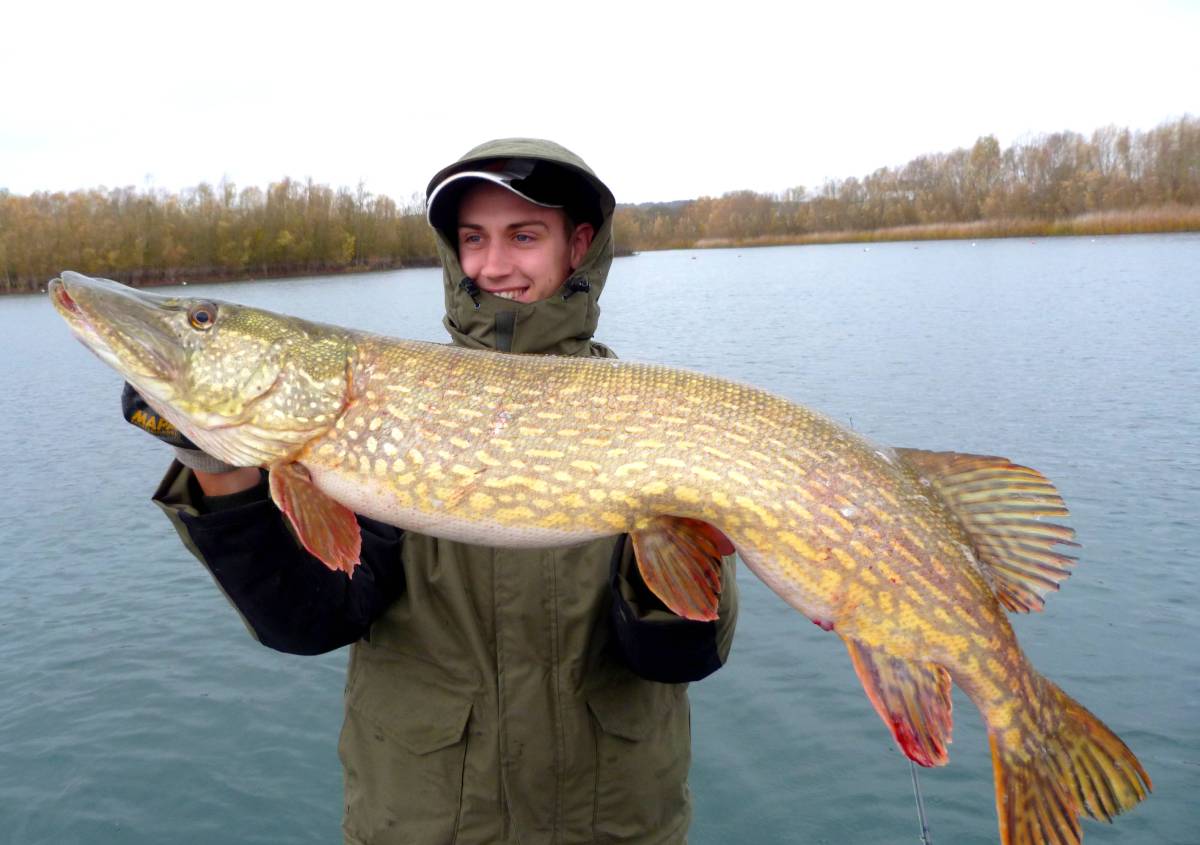 Hard swimbaits typically are slow sinkers and will be best for fishing in three meters of water or less. One good situation for hard segmented swimbaits is around submerged grass in cold water. Big pike will be hidden in the grass while monitoring what’s happening over them. Make a long cast and try to keep your lure right over the grass with a very slow retrieve. A jerk bait works very well too in this situation.

When the water warms up, grass will grow, and the open water layer will shrink. That’s when I shift to a pre-rigged soft swimbait. Look for a lure that can be rigged with the hook on the back rather than under the belly, that way the lure can glide on the grass without snagging it. This technique works great anywhere grass is abundant. Grass beds offer pike an opportunity for concealment and a prime food source as it attracts all sorts of baitfish.

Some lakes and rivers have other types of cover, it can be submerged trees and wood. You can use the same lures as before depending on depth. Make accurate casts to bring your big bait as close as possible to the cover. It’s important to fish slowly and methodically. Unlike perch or bass who will be triggered by erratic and fast movement, pike on the other hand are better fooled by a constant linear retrieve.

Pike is also known for following a lure without striking. There are many theories on what to do in this situation. Some will speed up the retrieve, others will pause. Both can work but more often than not the fish will lose interest. Musky fishermen in North America are using a figure 8 boat side. I found the best strategy is to just make another cast, and when possible, from a different angle.
In deeper water, say over four meters, a large soft swimbait rigged on a jig head is the best solution. Deep rivers and lakes will often have what’s called a pelagic population of fish. Small fish and pike alike will be in the water column out in open water. Locating baitfish with a depth finder is the only option to find the big pike. Use the right jig head based on the depth and size of your swimbait. It doesn’t hurt to add a treble hook under the belly since snags are not a concern here.

Big pike are not evenly spread out on a body of water. These fish are very territorial and will occupy a set piece of real estate. Finding the food source is the most important. Pike will not want to chase over a long distance to feed. In the case of a river, they will want to be sheltered from the main current. As previously mentioned, pike love grass, so find a spot with grass, access to deep water, and sheltered from the current and with abundant baitfish.

The name of the game for big bait for pike is making a lot of casts while being prepared for the big strike at any time. Many fishermen will fish with big baits for 20 minutes and give up. Even though you can catch a pike over one meter on a 10cm lure, you stack the odds in your favor by throwing a larger profile. So hang in there, keep fishing and the big pike will be your reward! I believe anyone can catch the largest fish in their bodies of water. You only need dedication and perseverance . Keep casting a big bait for pike and you will catch one!