Home » How to fish ? » Lure for trout: Expand your selection

Recently a lot of fishermen have shifted from live bait to lure for trout over the past decade. That evolution has been prompted in part by the wider increase in popularity of lure fishing for trout. However, the classic trout fishing lure like spinners and spoons still reign over most tackle boxes. Of course, fly fishing could be considered as a lure, but it will not be covered here. Let’s find out what else could widen your lure selection for trout.

Many manufacturers are now offering jerkbaits special for trout. They average 5 centimeters and are designed with trout color patterns. They are great for brown trout and rainbow trout. However, not all jerk baits have the same sink rate. Some are suspending, they will be the best choice for shallow water, say less than 1 meter, and sinking lures are better for deeper water.

Whenever possible I prefer to cast upstream at an angle and work my bait down with the water flow. Current means food source for big trout so I want by lure presented in the water column right where trout are used to find it.

If the current is too fast, I will cast slightly downstream on the opposite shore and let the current essentially work the bait for me. Therefore, it allows for maximum vibration from the jerk bait yet is slow-moving. Last tip: try swapping the treble hook for a single hook, it won’t prevent you from catching fish, and unhooking a fish is easier and safer, for you and the fish.

First of all, if you decide to try that, you can be quite sure that very few people have, and the larger trout can be caught that way. I’m talking here about crankbaits designed for bass or perch.

They will be about 7 – 9 centimeters long and designed to dive about 3 meters. That might seem deeper than most trout rivers, but that depth will be reached on a long cast in a lake. In a river with a typical 10 meters cast they won’t reach that deep, but whatever depth they do reach they’ll get there quick. And that’s the point, presenting an action-packed lure near the bottom.

Crankbaits also work great at deflecting of objects in the water, being logs, rocks, or anything else. Even though they will catch trout in clear water, I tend to tie them on in stained or outright muddy water.

Trout fishermen are often perplexed over very muddy water following a heavy downpour. Well, there’s your chance, it won’t snag as much as a jerk bait or a spoon for example. It’s an easy technique and it will catch trout. Don’t be shy of gaudy colors, chartreuse blue back for example has done well in off-colored water and more natural colors in cleaner water.

It doesn’t mean crankbaits are only for off-coloured and stained water. They will catch fish in any condition. I would recommend see-through colors or natural patterns for clear water. You won’t find many of the same trout-specific colors as those offered on jerkbaits. Minnows, juvenile trout, and the like are hard to find. You can use foil black or blue back or similar baitfish pattern. 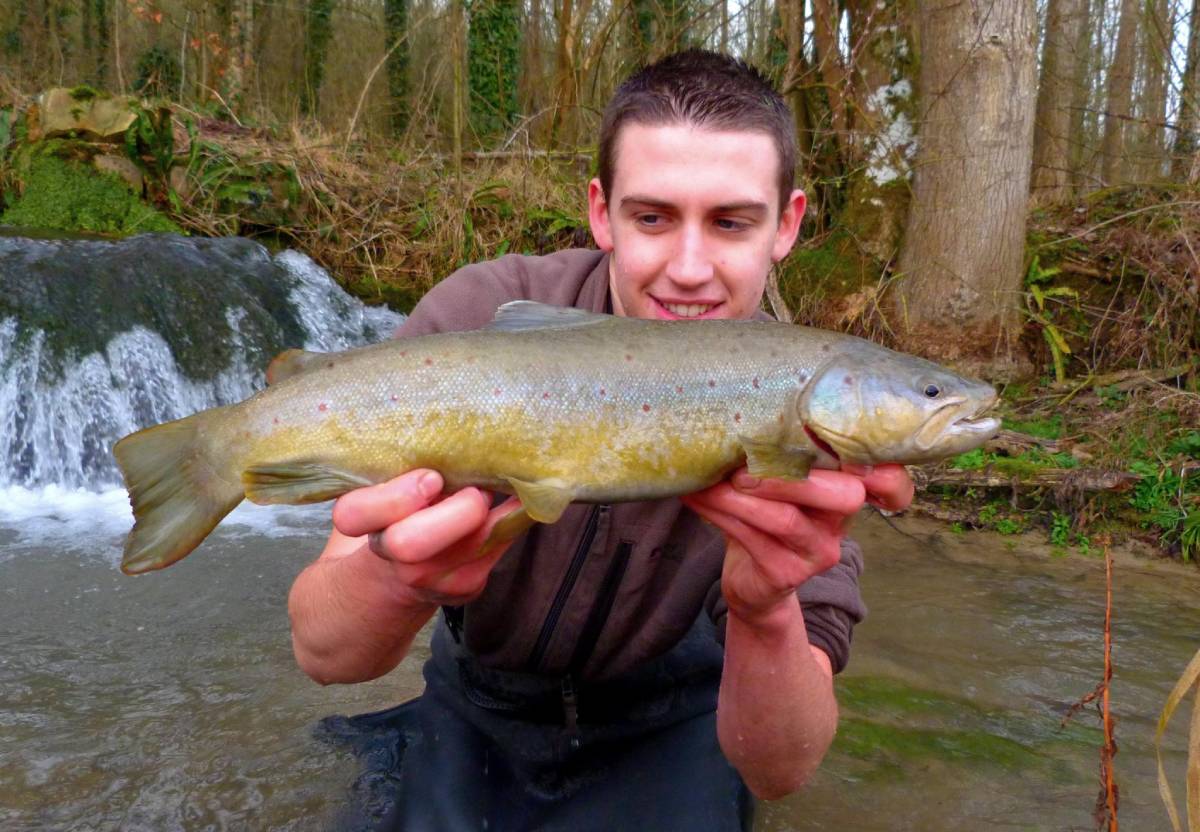 That’s right, big trout will eat just about any prey and will fall for a topwater lure. Granted this may not be the way to catch numbers but it will select the larger fish and draw them to the bait. After all, isn’t dry fly fishing topwater too?

The first lure I would consider are walker-type stickbaits. Select a 5 to 7 centimeters lure in any color you like, translucent for super clear water, and try it on calm wide expanses of the river. This is a fast presentation that will allow you to cover more water and again, get the biggest trout around.

Make sure you can cast beyond the likely habitat as it takes a little time to get the cadence going. Trout love to chase a small minnow in distress and will hit your bait aggressively.

I found that mini poppers are good too. Cast it up-current from your target and let the water float it down to the slack water behind a rock where trout lives. Just pop it once or twice and watch for the strike. Unlike walking baits the hit will be very subtle and hard to notice. 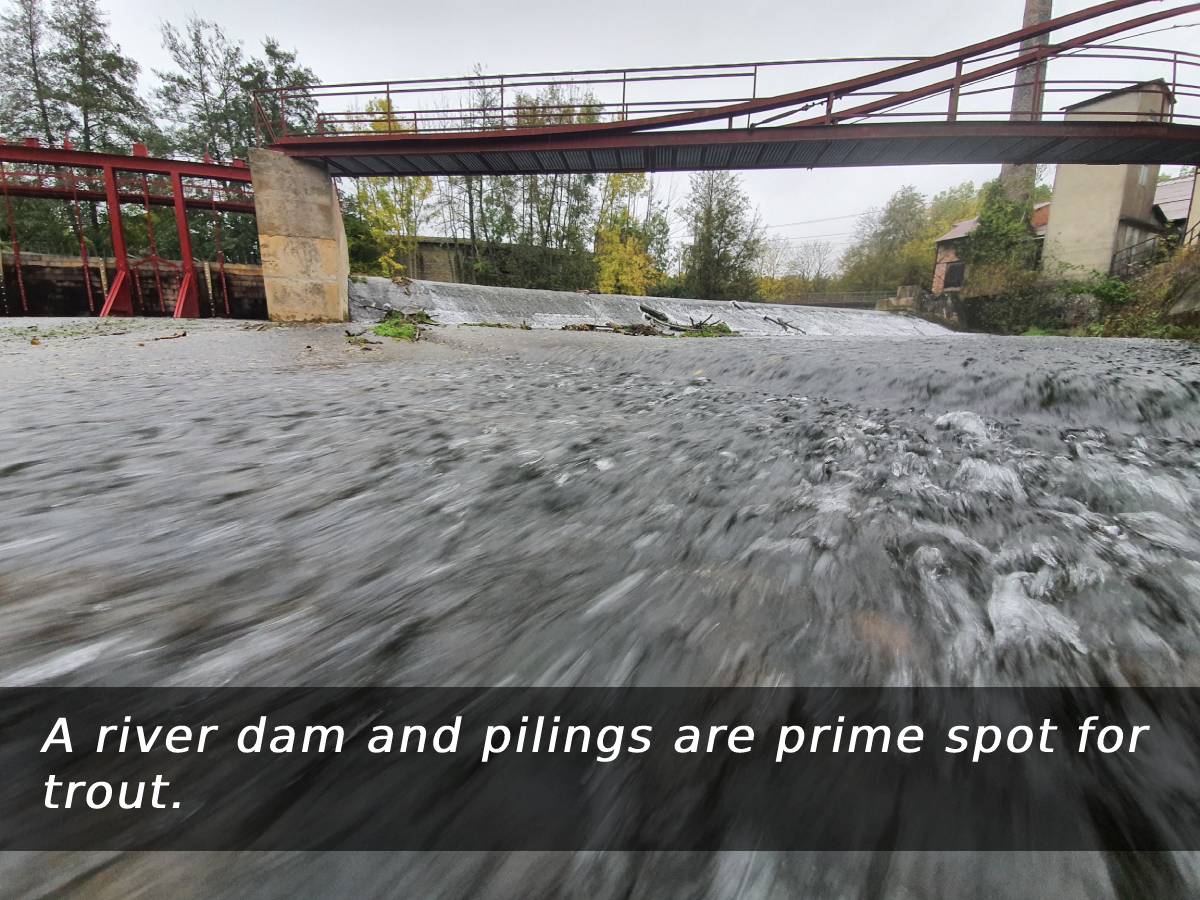 There is a debate about whether or not lures for trout should be silent. Many fishermen believe trout tends to be noise shy. On a hot summer day, you should try and dip your head under water. You will find that a river is a very noisy environment.

Current swishing around rocks, waterfalls and gravel rolling create a lot of noise. I am therefore not convinced about the need for silent baits. I think it will depend on the type of river and mood of the fish. Make sure you pack silent baits but always try noisy lures first. If you see trout come up to it and turn around before striking, it’s time to swap for a silent bait.

In small streams and fast river it can be a good idea to try soft plastic. It’s a very effective finesse presentation rarely used in trout stream. You will need small paddle tail swimbaits or worms. I use the lightest weight I can get away with or a drop shot to snipe trout under water fall and big boulder. 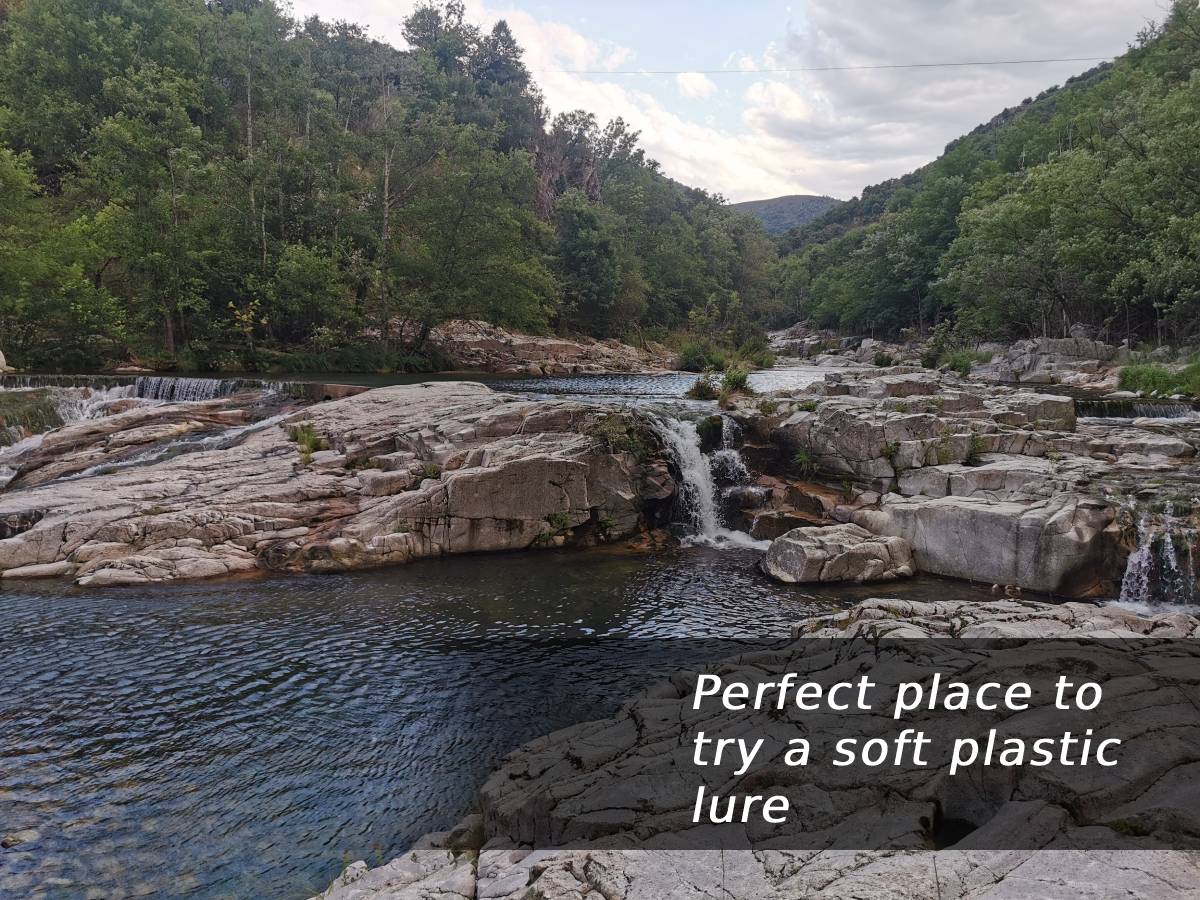 You can fish right under your rod tip, with a very light line. I don’t move the lure and let the moving water impart action to my bait. It’s a game of patience. Trout won’t stand that intrusion in their territory for very long.

So it’s just a matter of waiting for them to lose it and strike. This method is not efficient to cover lots of water. But instead it’s great for heavy saturation on a small spot high percentage area. The same tackle, line, sinker, and lure that you use for perch will work for trout. 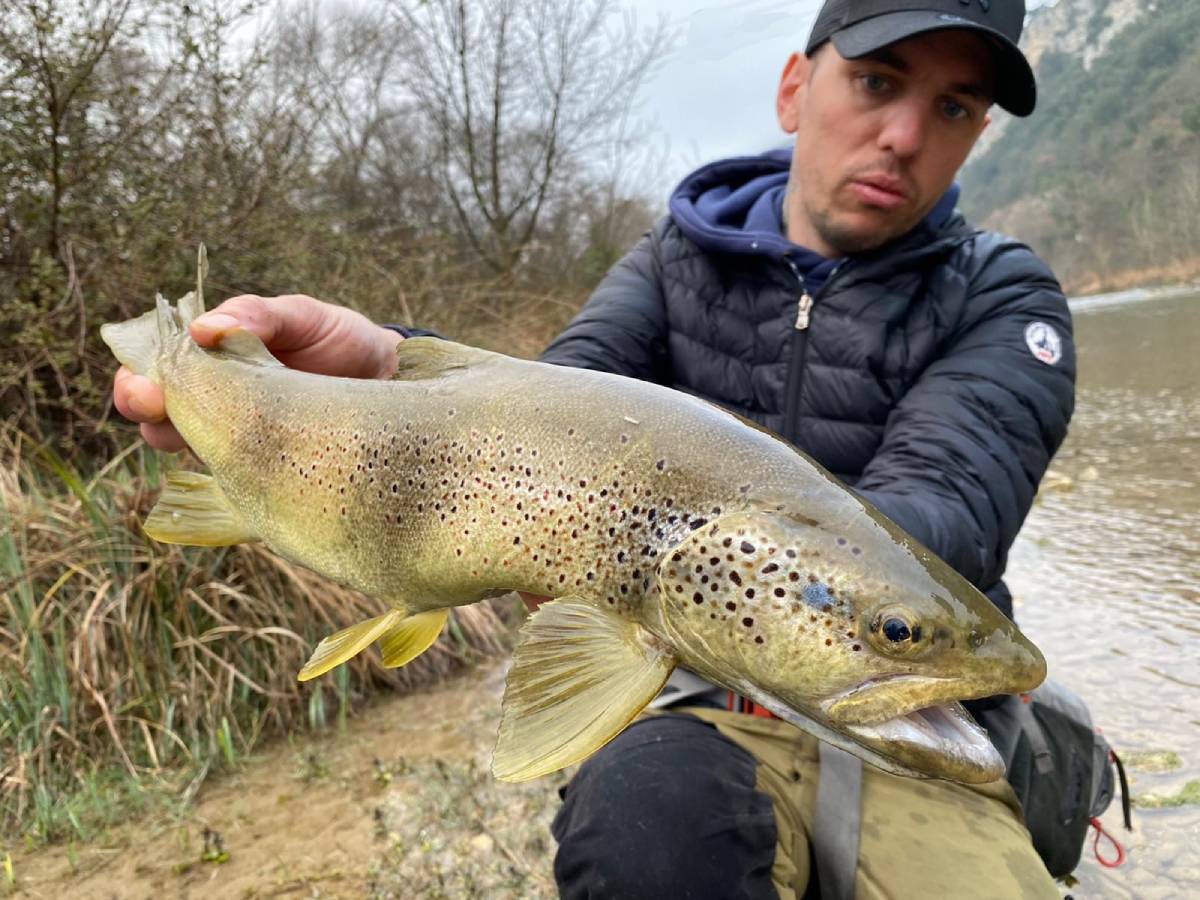 Trout fishing has always been boxed in a very narrow choice of lures like Mepp’s Aglia or panther martin spinners. Many other techniques stolen from other game fish are very capable of catching trout. Soft baits on a jig head are good too, stay tuned for more on that!