Jerkbait fishing is probably one of the few techniques that actually looks and behaves like the real thing. It is a visual lure, it usually has subtle rattles so it truly is a multi-sense lure. Jerkbaits are fast-paced high-energy fishing. No time to wait and slack, it’s a great search bait to cover lots of water.

Before diving into each season in more detail, it must be said that jerkbait is primarily a clear water lure. You can fish it with good success in stained water, especially in the summer, but you need at least three feet of water(1m) of visibility.

It’s possible to catch fish with a jerkbait by just reeling it in like a crankbait. However, that’s not how it was intended to be used. It’s called a jerkbait for a reason, you need to learn to jerk it. The best way to explain is to snap your wrist as if banging a drum with a stick. It’s not a pull, it’s a hit. The reason for that is the need for a bit of slack line to let freedom to the bait to jump sideways. 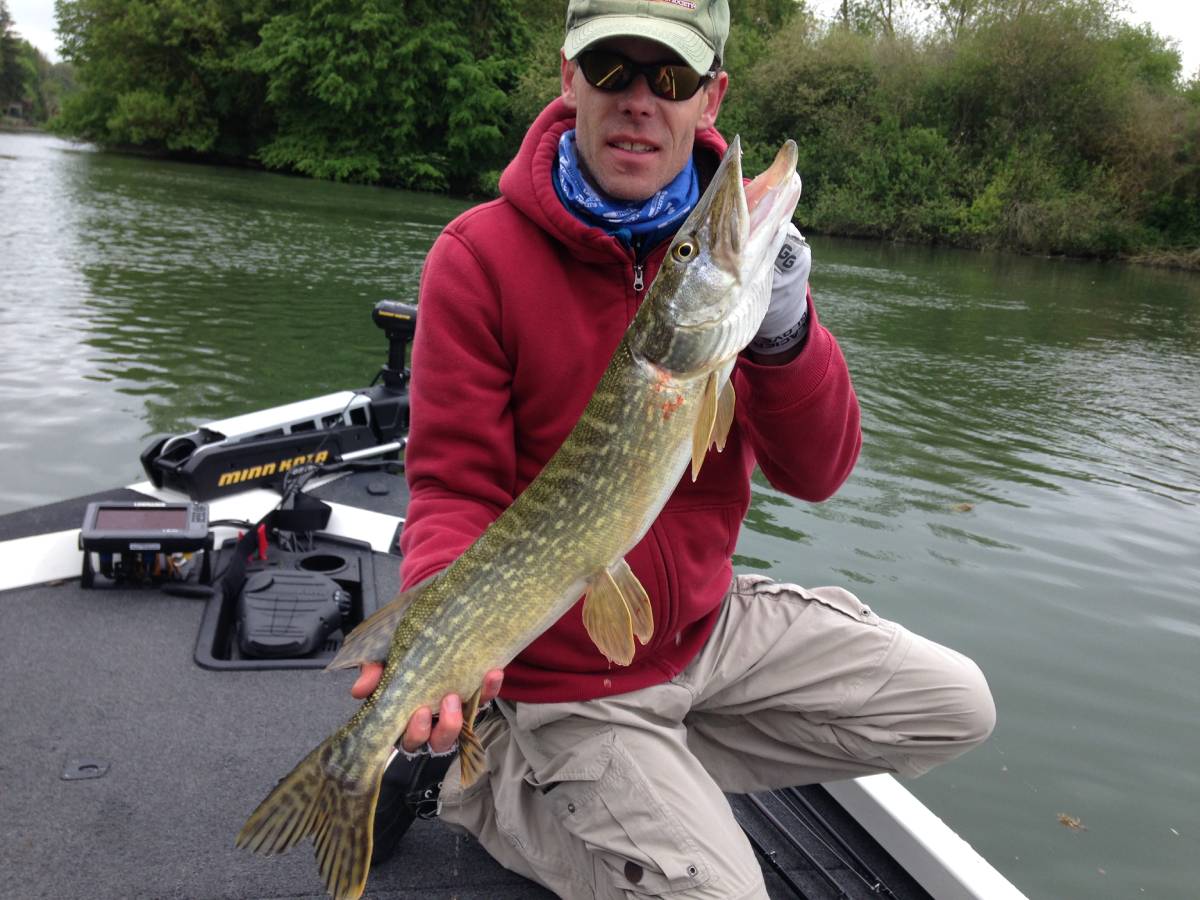 I choose winter first because it’s the best jerkbait fishing season. The water is usually clear, grass beds are gone and the water is free of floating debris. A little bit of sun and surface ripple definitely helps too. In cold water, it’s important to pay attention to your speed of retrieve. Regardless of season and temperature, the jerk part of the retrieve is always the same.

What changes however is the pause between jerks. So it would look like this: jerk, jerk, pause. I usually choose a suspending jerkbait for winter fishing. So during the pause the lure just sits there, motionless. And that’s very important. The pause can last from 3 seconds to about 15 seconds, it doesn’t seem like much reading this article, but believe it’s a long time standing on a cold winter day.

We know that fish tend to be deep in the winter, and it might seem counter-intuitive to fish a lure that dives to about one and a half meters deep. And yet, providing the water is clear enough, fish will come and get it. What we also fail to understand as anglers is that fish are not always on the bottom.

So if I’m fishing a six-meter deep spot, perch or pike might be sitting at about four meters and will come up two meters to get the lure. It’s always better to have a lure over a fish’s eyes than under.

If the fish are unwilling to come up to get the bait, it could be worth a shot to try a deep diving version. I keep that as a last resort because the long lip tends to restrain the lure’s capacity to jerk left and right. But these lures can be the only option and it’s good to keep a few in the box.

Spring is also a good jerkbait fishing season. The season doesn’t happen overnight and the winter pattern can linger on for several weeks. Plus fish don’t follow the same route at the same time, and different parts of the lake are not warming up at the same pace.

I tend to fish jerkbaits in the middle of the day when the sun is high. Again, it’s a visual lure. I would consider jerkbait a finesse presentation. It’s a fast action finesse presentation, can you think of another one? That’s what makes it so useful in a tackle box. Most finesse fishing means slow, and that’s good, but not this one!

Clearly, summer is the time of year when I throw a jerkbait the least. It’s not because it won’t get bit, it’s only because other power techniques will be more efficient. I’m thinking about square bill crankbaits, spinnerbaits, or chatterbaits. However, there are a few specific cases where a jerkbait is the best lure to throw; here’s a couple of cases:

Jerkbait fishing is a great backup for topwater fishing. If I’m fishing a stickbait I’ll always have a jerkbait tied on, on my deck. If I get a short strike or a boil on my topwater, I’ll throw the jerkbait and usually, hopefully, get the fish to commit this time.

During the hottest days of summer, fast currents, waterfalls, and water discharges are great places because they usually have cooler water with higher dissolved oxygen content. They attract baitfish and game fish alike. White water under dams and tributaries are some of the reliable spots in the summer. I can’t think of a better lure than a jerkbait to fish these hotspots. You can catch every fish species doing that, zander, chub, barbels, pike, perch.

In the summer many fish will spend the whole summer off shore feeding on schools of baitfish. They might hold deep but also shallow. This is especially true on windy days or during a cooling trend. Some days a topwater will be good if you see schooling action on the surface, but often action will happen just a couple meters under the surface. A jerkbait is surely the best choice then. Try to match the forage size and color and you’re on!

Early in the season, we’ll still be on the summer pattern described above. But as soon as the water really cools off and the grass dies off, you can cover more water with a jerkbait. The water tends to become clearer, the fish are feeding to fatten before the winter. I like to use a bigger size jerkbait to match the size of forage and to offer the fish a morsel worthy of the effort!

In rivers, I’m fishing open water’s main current. It’s easy to locate because that’s where dead leaves are concentrated. With the water still fairly warm, we don’t need to make the long pauses so important in the winter. It’s still fast fishing.

In lakes with grass, I will focus on areas where the dying vegetation transitions into open deeper water. That’s where big pike and perch are ambushing baitfish.

If you night fish, a jerkbait is a great lure to catch fish after dark. But the funny thing is that it works used with an entirely different technique. The hard jerks don’t seem to be as efficient and I’ve found it better to just crank the lure back, or make a long sweeping and pause retrieve. Either way, it’s better to switch to a more mechanical steady retrieve.

Jerkbait fishing is fun, easy, and efficient. Just make long casts, get down a bank, and cover water. You don’t need to own hundreds of lures, just a couple sizes and a decent selection of colors to match most species of forage and you’re good to go. It catches pike, bass, perch, and the occasional zander in low light conditions.